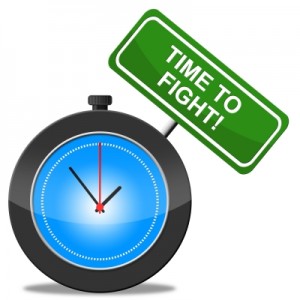 You have to fight for your marriage, the hearts of your kids, to pay the bills, to keep the weight off, to stay morally, physically and mentally strong. And if you get knocked down, you’ve got to get back up and keep fighting. Thank God there are moments of rest, but as a whole life is a fight.

In the words of Rocky Balboa, “Life ain’t all sunshine and rainbows.”

The Christian life is the same way. It isn’t just one big positive experience that we all get to enjoy while waiting for our spiritual bus to pick us up and take us home to Glory. No, it’s a fight, too.

While we enjoy the tremendous blessings of being grafted into the Vine, adopted into the family of God, and set apart for God’s glory, there are times when Christians are called to fight for the faith – moments when God tells us to stand up and step into the battle between good/evil, truth/lies, light/darkness.

This is the reason why the apostle Jude wrote his letter to Christians living in the first century. His teaching is for all Christians today, especially for the rising generation of millennial believers in the face of the epic battles they face today.

Jude encouraged the believers, saying, “Beloved, while I was making every effort to write you about our common salvation, I felt the necessity to write to you appealing that you contend earnestly for the faith which was once for all handed down to the saints” (Jude 1:3).

If you’re a contender, that means you’re a fighter. For the two of us, one of our secret pleasures in life is watching the Ultimate Fighting Championship. Each champion has a list of “contenders” vying for his belt. The one thing all the contenders have in common is they all know they’re fighters and are ready at a moment’s notice to step into the ring and get it on. They aren’t just sitting around fat and happy, having no clue what’s happening around them.

Unfortunately, when it comes to the faith, many Christians don’t know they’re contenders and aren’t ready to fight. This is one of the reasons why the book of Jude was written – to exhort Christians to fight for the faith.

Although Jude wanted to talk about the good life of salvation and the blessings it brings to people and nations, he instead threw haymakers at those who “pervert the grace of our God into a license for immorality and deny Jesus Christ our only Sovereign and Lord.”

He jumped right into the Octagon and, in the words of Bruce Buffer, UFC’s voice in the ring, he shouted, “It’s time!”

He wasn’t about to sit by passively while false teachers made room for “sexual immorality and perversion” to be tolerated by God’s people.

This is a message most pastors won’t even touch today. George Barna’s research at the American Culture and Faith Institute reveals 90 percent of today’s theologically conservative pastors believe the Bible speaks to the issues of the day, such as homosexuality amongst others, but only 10 percent of them will speak to it.

These brothers need to remember who they are. But maybe they’re afraid. Perhaps they haven’t been training to fight? Or maybe they don’t believe it’s their responsibility.

Either way, the book of Jude puts it to rest – we must “contend for the faith.”

The Apostle Paul believed the same when he said, “We tear down arguments, and every presumption set up against the knowledge of God” (2 Corinthians 10:5).

Build yourself in the faith (v.20). This is the discipline it takes before you step into the ring, training and building yourself strong in God’s Word so that you’ll be ready to contend when the fight is on.

Pray in the Spirit (vs 20). On this verse, Matthew Henry said, “Our prayers are most likely to prevail, when we pray in the Holy Ghost, under his guidance and influence, according to the rule of his word, with faith, fervency, and earnestness.”

Stay in the love of God (vs 21). Love for God and others is the “it” factor the greatest spiritual contenders have. When love is our motivation, we’ll fight against ideas and not individuals. Fighting for the faith must be done with compassion, making a difference between the weak and the willful.

Wait for His mercy (vs 21). Eagerly waiting for God’s mercy when He returns arms us against the snares of sin in our own lives. This hopeful anticipation renders us ready when the devil, our only true opponent in this fight, tries to take the belt of truth from us.

Though we’d much rather sit and relax by the poolside of American Christianity, believing there is no fight, we feel compelled as Jude did to encourage believers to start contending for the faith today. “It’s time!”