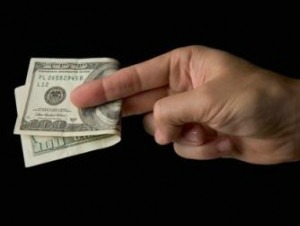 If I handed you a $100 bill and asked you to give it to someone else, you would probably hand it over without a problem. If I were to ask you to reach into your pocket and pull out whatever cash you had inside and give it to someone else, there would probably be some hesitation. Why would you freely give on one circumstance and hesitate on the other? Because of the principle of “ownership vs stewardship.” In the first instance, you simply were possessing something that was not yours. When asked to give it away, it was very natural for you to just give it. In the second instance, you saw yourself as the owner, and ownership by definition, grants the possessor the “right” to transfer the possession to whomever they desire.

When you own something, you have certain rights that go along with that ownership – you are granted the “right” to do whatever you want with what you possess. Keep it or give it, it doesn’t matter, because it’s up to you. When you’re a steward, however, you have possession of something but do not have any “rights” associated with it. Why? Because it’s not yours. The rights remain with the owner, not the steward. If the owner hands a steward $100 and tells him to give it away the steward must give it away because he doesn’t have the “right” to say no.

Are you an owner or a steward of what you have (family, business, possessions)? If you see yourself as an owner, the first thing you will claim are your rights to do with your possessions as you wish. This is what leads to being RICH in spirit. If you see yourself as a steward then the first thing you will claim is the fact that what you possess isn’t yours and that you will do with it whatever the owner wants you to do with it. This is what leads to being POOR in spirit, of which Christ spoke in Matthew 5:3 – “Blessed are the poor in spirit, for theirs is the Kingdom of heaven.”

David spoke about this when he deposited his money into the house of God. He said in 1 Chron 29:16b, “….it is from your hand, and all is yours.” He simply saw himself as a steward who had no rights associated with the things he possessed, and this is what made him a man after God’s own heart. ​