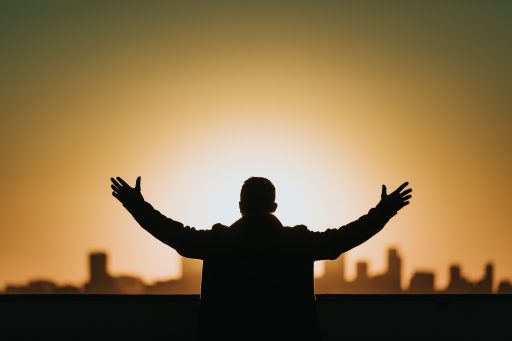 One of our favorite family movies of all time is “War Room” by Alex and Stephen Kendrick. Our kids often ask us to play it when we’re on road trips and we gladly oblige because it’s an inspiring film that shows the power and importance of prayer, which is vital in the life of every believer who chooses to stand in the gap for God.

In the movie an older woman, Miss Clara, teaches a struggling wife how to pray – how to create a war room of prayer where she does battle on her knees against the spiritual forces of darkness, especially those tearing her marriage apart. The final scene ends with Miss Clara in her own war room – a small closet in her house – on her knees crying out to God to raise up a generation of believers who will do battle for the Lord.

“Raise ’em up, Lord, raise ’em up!” Miss Clara prayed. “Raise up warriors, Lord, who will fight on their knees!”

If you haven’t seen the movie you should. There’s no doubt it will energize your prayer life. Your kids will love it too, and the prayer at the end will blow your hair back.

Interestingly, the movie was filmed in our hometown, Concord, North Carolina. We’ve been friends with the Kendrick brothers for years, so when they were looking for a place to film their next movie we pitched the idea of filming it here. They finally caved to our constant badgering and brought the entire movie production here in the summer of 2014.

But a movie on prayer filmed in our hometown meant more to us than anyone involved ever really knew. We moved to Concord in the early 2000s just after pro baseball because of a man who had his own war room – a man who changed the direction of our lives forever, as we discuss in our upcoming book “Bold and Broken.” He lived out the “War Room” life, especially the final scene where Miss Clara was on her knees crying out to God. That scene was an exact picture of what this man did every single morning, in Concord, North Carolina, just a few miles from where Miss Clara’s prayer scene was filmed. Never before had we seen a man of prayer quite like him, nor had we been around someone who fought God’s battles on his knees with such spiritual power and tenacity.

His name was David Drye and he lived in Concord, North Carolina where he operated his company of 435 employees. He also had his own Christian school and television program called “The Voice of Truth” where he shared Biblical principles regarding cultural issues. When we were juniors at Liberty University, he invited us to speak at his company and school and to be guests on his show. He also extended an invitation for us to stay at his house the night before.

It was late when we got to his house, but not late enough to see we were walking into a mansion. It was bigger than any house we’d ever stepped foot in. After smashing a couple of Mr. C’s burgers, he ushered us up to the bedroom where we’d be sleeping. We drifted off to sleep in the amazing comfort of beds that far exceeded our dorm room twin-sized mattresses back at Liberty. Then, at 4:30 a.m. we were startled awake by the sound of someone yelling down the hall.

“Dude! What’s that?” We both got up and crept to the door, cracked it open and looked down the long dark hallway. We could see light coming out from under the door of Mr. Drye’s office. As we stood there with baited breath and hearts pounding, we realized he wasn’t yelling – he was praying.

For the next hour we heard him pouring his heart out to the Lord and doing battle with the enemy. He would go from telling God how much he loved Him to rebuking the devil in the name of Jesus. “You have no authority over my family or my business, devil!” he shouted. “Get away from them!”

We grew up in a family that believed in prayer and put that belief into practice. But this was a whole new level – never before had we seen such emphatic prayer. This man was on his knees in hand-to-hand combat with the devil.

Fortunately, we were able to fall back asleep for about an hour. That morning we told him we heard him praying.

After breakfast we spoke to his employees, then his students, and then appeared with him on his show. Before the day wrapped up and we headed back to Concord, he said, “When baseball is over, would you consider coming to work for me, so I can teach you what I know? I’ve been praying for God to spark a revival in America right here from Concord, and I want to pour myself into young men like you.”

Uh, do bears poop in the woods? We responded with an emphatic “Yes!” David Drye gave us a vision for life after baseball. To be part of a thriving business led by a man with a heart to change the world for Christ – now that was magnetizing.

That is how we ended up living in Concord, North Carolina and how “War Room” was filmed in the same location. But the story doesn’t end there. David and his wife Anne were tragically killed in a plane crash two years after we met, and two days after his death I (Jason) received a box at my front door with Mr. Drye’s handwriting on it.

But … you’ll have to wait until our book comes out to find out what he said.